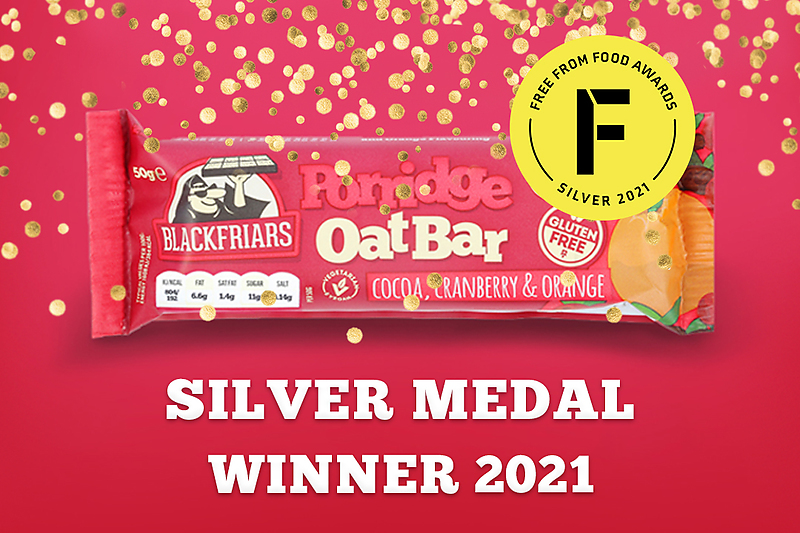 We have been awarded Silver in the ‘Snack Bars’ category at the national FreeFrom Awards for it’s Cocoa, Cranberry & Orange Porridge Oat Bar, which is Gluten and Dairy Free.

The FreeFrom Food Awards are the UK’s only award for free from food and drink which recognises the very best in free from products which can be Gluten Free, Dairy Free, Sugar Free, GM Free.

Food and drinks that win the awards are seen as benchmarks in the business; small producers and supermarkets compete on a level playing field for one the coveted awards.

The national awards welcomed more than 600 entries and over the course of 4 weeks, a dedicated team of judges, from manufacturers, product developers and chefs to nutritionists, coeliacs and allergy reactors, scrutinised, tasted and discussed each and every entry.

Tamara Madylus-Truman - Marketing Manager at Blackfriars said “We are delighted to have been awarded Silver for our innovative Cocoa, Cranberry & Orange porridge oat bar, and be recognised at a national level by respected independent judges.”

Mike Madylus – Managing Director said “This recognition means a lot to us and is testament to our on-going commitment to consumer demands for reduced added sugar, dairy and  gluten free in the products we sell”.